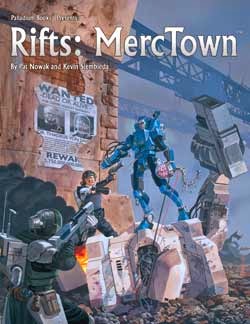 Merc Town is a busy place with a lot happening. There is plenty of work to be had for those who have the skill, or at least the will, to get it done. We all started out alone, plastering the city looking for work. It didn't take long for Branighan, leader of BASTRD, to get in touch with all of us with a job offer.

He has two other regular teams, but they were both out on jobs and he needed a group now. So he slapped together what he could find on short notice, and that was us. The job was a protection detail. Four scientists and their work crew were hunting a vault of pre RIFTS information. Our duty was the help them finish the job and bring back the four scientists. Bonuses for each of them and another bonus if they find what they are looking for.

Branighan equipped us well. He started by giving us all video boxes for our helmets so he could see what was happening. Then he set us up in a portable bunker that could be dropped off by his helicarrier. It was like a giant pill box with cargo room for a stripped down Big Boss ATV and a couple hover cycles. We had a few hours to travel so explored around a bit. Daichi was quick to find the control console and start playing with the equipment, he quickly got the systems up and air filters on so Saskia would quit complaining about the stale sweat and body stench from previous use. We were lucky to stumble upon a vintage video collection in the system, so we had some in-flight entertainment.

As soon as we were dropped off by Dusty the carrier bugged out quick. She had no interest in hanging around where we were going. We opened up and set up a perimeter with some sensor gear we found in the bunker. We also found a nice big gun we could mount up on one side. After getting set up we had a chat with the scientists. Dr. Weston, Prof. Atkins, Hurts and Dolten. They gave us a little more info on what they were looking for and the general feeling that they were terrified of the city after sundown. We decided we had to scout it out despite it being nearly dusk. We put two up on the hover cycles, the rest on the ATV and took a short trip to the edge of the city. Our drop site was only about a mile out. When the sun went down everything became dead silent. It was spooky, there were vines and trees growing out of the pavement, there should have been animals, insects, something. We decided to come back during daylight.

First thing in the morning we made a plan with the scientists mapping out some points of interest  to search. We acquired a red shirt to come with us for navigation and as a guide, then headed out. We checked a couple POIs before coming across a truck that looked like it had been sitting for a while, but it wasn't old. Inside we found safety deposit boxes with some good loot in them, then we noticed it was in front of an old bank. Of course we needed to investigate. Once inside we found our way down to the vault where we discovered several large carapaces, perhaps from a bug the size of a house cat. Nothing in them, just the shells. The vault looked like it had been opened, then shut back up. We had to be cautious, in case something was trapped inside. Daichi opened up the door and tossed in a flare while the rest of the group held weapons ready. We could see the silhouette of a humanoid, immediately Saskia shot it, through the head, perfect shot, then if fell over. She murdered the corpse with great skill. We didn't have a lot of cargo space in the ATV and the truck could not be started so we decided to comeback after the job to finish up the scavenging.

While scouting another POI we cam across another truck, this one parked inside a building missing part of the front wall. We found another corpse this one dissolved by some kind of acid. Dachi was able to get this truck running and it was getting dark so we took it back to base.